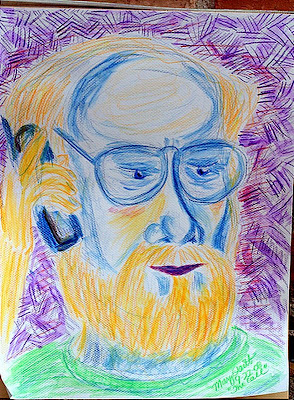 "The Call," by Mary Stebbins Taitt. 87-year old ML fell and could not get up. We got a call from Lifeline. But she'd already been rescued by her neighbor.

This quick sketch I made while BB was talking to ML after the fact.

The upsetting thing is, PB took the call from Lifeline and didn't bother to tell me, even though I was home and BB was not.

I did not scan this, although the quality might have been better--that was an ordeal yesterday!!!! And I am leaving shortly for PA and NJ camping etc--will not be able to get online--this will probably be my last post for over a week.

BB listens to PB practicing (a sketch in water-color crayons) 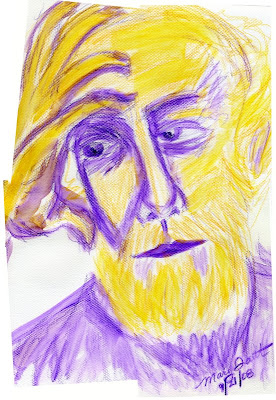 I did this last night really quickly, sketched it with the w-c crayons
and then brushed over it with water.

Then today I spent about ten times longer than it took to create it
trying to scan and merge it because it is way too big for the scanner.
It's missing some hunks, and the color isn't quite right. But here
it is anyway.

NOTE: I am leaving tomorrow morning to go to the Dodge Poetry
Festival in New jersey--will be gone more than a week and camping and
prolly incommincado, so prolly won't be posting at all until I return. 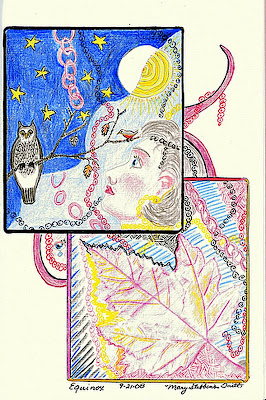 The Equinox, by Mary Stebbins Taitt. In Mike's sketchbook, for sketchbook exchange.

I hate to be a whiner, but this really didn't scan well--the blues are actually darker than this and the pinks pinker. Oh well.

Will the Real Garryd Knudson Please Stand Up 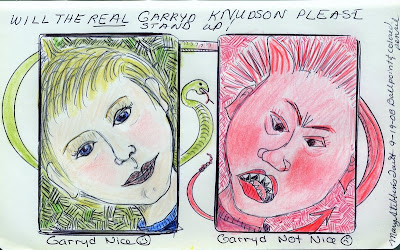 Another in Mike's: memory (remembering) 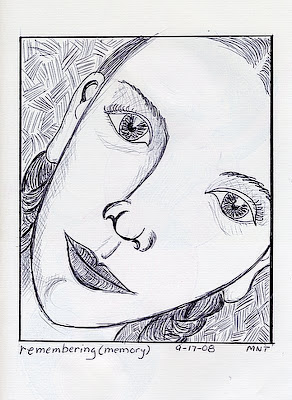 One in Mike's: Exuberance 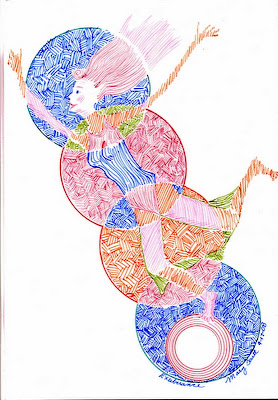 Exuberance, by Mary Stebbins Taitt. I was wanting more very
fine-point pens, but had to make do with some that said fine but
weren't, very. And just for Andrea, lol, I used some stencils. And I
copies Milo's shading style, though I haven't quite got it down as
well as she does. Trying to learn here.
Posted by Mary Stebbins Taitt at 9/18/2008 02:11:00 PM No comments: Links to this post 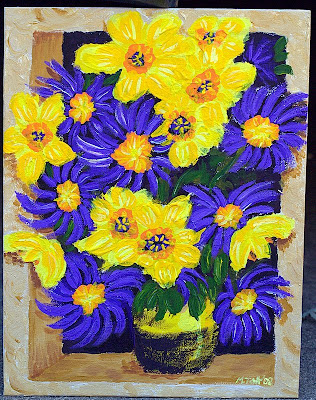 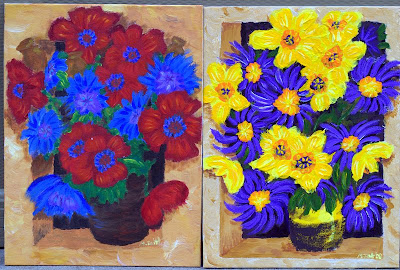 Italain Windows, by Mary Stebbins Taitt. One more from the Italian
Window series. These are actually cubbies rather than windows. The
yellow one is new, the red one is the one it goes with, as a set. I
painted that earlier. They didn't photograph well, though--the yellow
one is actually with PURPLE daisies. (Or lavender). None of the
colors came out quite right. These are a gift for Michael Seraphin.
Posted by Mary Stebbins Taitt at 9/17/2008 03:35:00 PM No comments: Links to this post 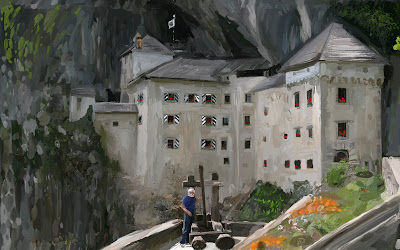 Predjama Castle, Slovenia, digital oil painting by Mary Stebbins Taitt, in artrage. This castle is build into cliffs with caves. It withstood a year-long seige because the residents were able to go
through the caves to a village in the next valley for supplies. Then the Lord was murdered in his bathroom. (I may be remembering two different stories, but if so, they were both from this same castle.)

If you want to see a little more detail of the painting, click on the image. 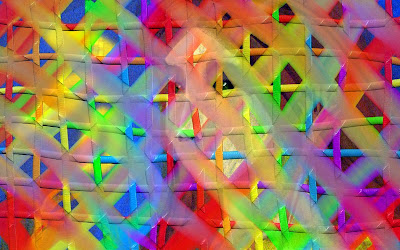 The Memory Filter VI, by Mary Stebbins Taitt. I've done a series of these, but this is my favorite so far. I did this and the others in Artrage. I used paint tubes, palette brush and layering an earlier painting (a juvenalia self portrait.) Click on the image to see a larger version for more detail.
Posted by Mary Stebbins Taitt at 9/16/2008 03:42:00 PM 2 comments: Links to this post 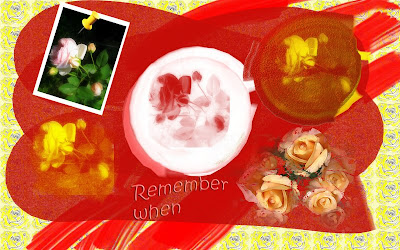 Wait, What? (Or, "Can you come out and play?"), by Mary Stebbins Taitt

This is another new painting using Artrage, this time an abstract. Artrage can be downloaded free in a permanent but not fully functioned version (that is still pretty good). 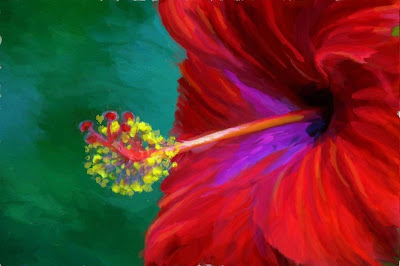 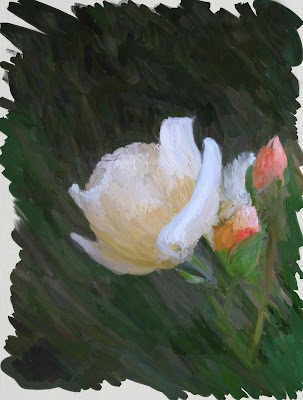 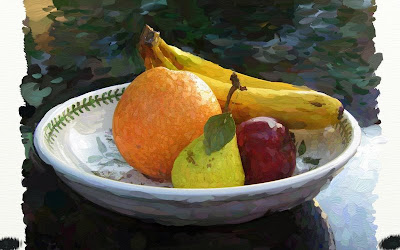 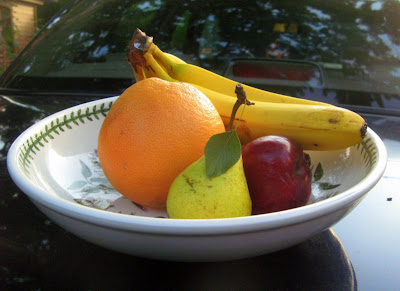 I purchased the Artrage program from Ambient. There's a free download, but it's missing some stuff--but still does a lot--there's a $25 download. I got the $39 version that comes with a CD and an 80-page manual.

I had terrible insomnia last night, which gave me an opportunity to play with my new toy. I had thought it was a plug-in for photoshop (and I sort of wish it were! then you could use it in combination with other photoshop effects etc)--I thought that's what I'd read, but I'd misremembered, I guess (I read a review in the Photoshop users Journal). It is not, or, if you can do that, I haven't figured out how. It's its own fully functional program.

My first attempt, the red hibiscus, did not turn out all that well. Either did my second, the rose (recognize that rose?) I think the third is a little better--I did that this morning. The last picture
is the original of the fruit bowl still life.

You can load a picture, and then load another layer (yes, there are layers), and put a tracing version of it and paint into that layer and it makes it look like a painting. The oil paint is very realistic, as are the markers and pencils. More realistic (or closer to real paints and markers etc) than the photshop tools.

However, there are no shortcuts,a t least none I have discovered. Every paint stroke you have to make yourself. It took me a while just to begin to get the hang of it. You can change brush size and paint type and the way the paint responds. I just discovered that there is a slider for something I didn't realize had a slider. But so far, I haven't figured out any way to change the brush size other than typing in a percentage number, kind of a pain. But there is so much, that it
will take a while to figure out.

The palettes are in the corner and move out of the way when yr painting. Which is nice.

So far, I have to say, this program is not for the faint of heart. And my results are not that great for a lot of effort. But there are always learning curves. I will report back as I experiment.

You may have seen the red hibiscus before--I did a smudge painting of it on photoshop which came out MUCH better. However, when I did that last night, I hadn't yet learned how to change bush sizes or proper layering of the images I was attempting to paint.

You can also paint from scratch. I did one of those too, but deleted it. But I could see possibilities in it! These three are from photos.

I am not sure if there is any way to import the images into photoshop--that would be ideal What I did is save them as jpgs and then open those in PS. But the smudge brush in PS does NOT combine well with the AR brushes.

I recommend if you're interested you try the FREE DOWNLOAD first, see what you think. I recommend that if you decide to try it, get the image PERFECT in photshop first (as close as possible as to how you want the painting to look). Then load the image in the bottom layer, add a new layer, put the tracing image (same image) in the second layer and be sure the palette is set to paint from image colors. You can add other colors later. Just be aware the process is fairly time consuming, so don't start until you have a little free time.

Click on the images to view larger. Note the two black spots in the bottom corners of the still life with fruit. That's where I attempted to click on the palettes and missed. There is an undo function under edit in the drop-down menu.
Posted by Mary Stebbins Taitt at 9/11/2008 02:01:00 PM No comments: Links to this post 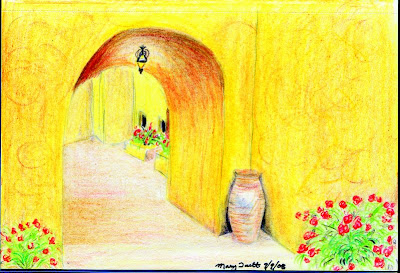 Am I the only one who has trouble getting things to scan well?

A Plate of Oranges 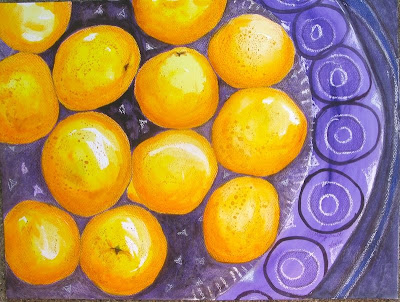 A Plate of Oranges, by Mary Stebbins Taitt, watercolor, water color
pencils. water color resist crayon, pastels. This is a new version of
a water color painting I did last April from an exercise in a painting
magazine. (The instructor's version was better.)

Orton Effect, Roses from our backyard 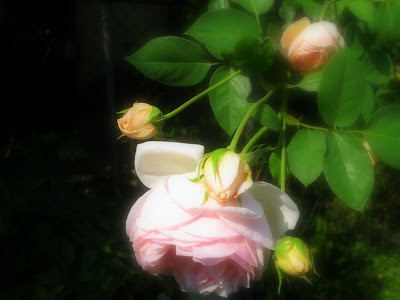 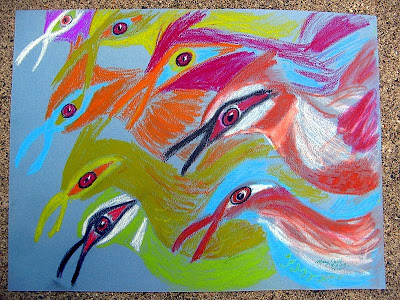 Email ThisBlogThis!Share to TwitterShare to FacebookShare to Pinterest
Labels: pastel

Self-portrait of the Artist with Roses and Checkerboard Wind 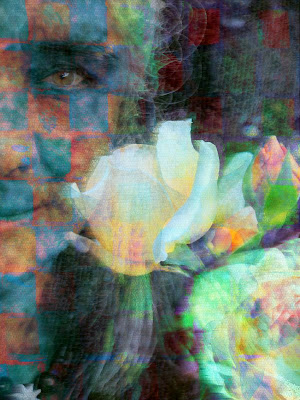 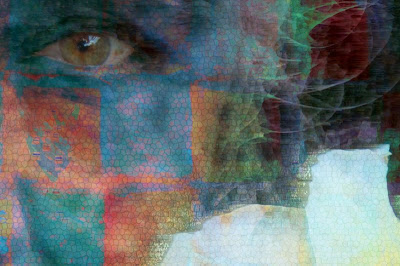 Self-portrait with Roses and Checkerboard Wind, by Mary Stebbins
Taitt; digitally composited and altered photos, also by me. (I am
wearing my new necklace.)
Posted by Mary Stebbins Taitt at 9/05/2008 01:14:00 PM 2 comments: Links to this post 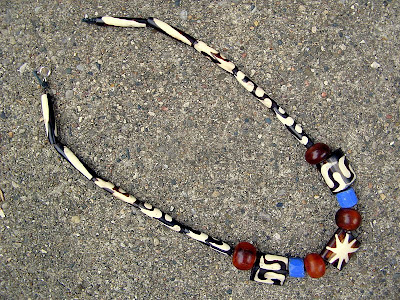 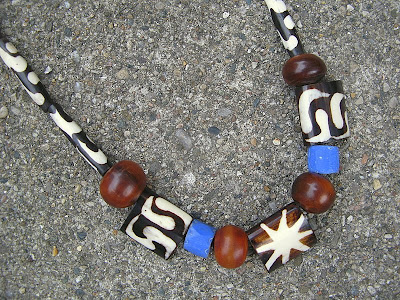 I made this Bone Star necklace from beads we purchased at Hemispheres Trading Crafts in Cheyenne, Wyomning on our trip to Colorado several summers ago. These beads finally caused me to buy the hardware needed to string them and while I was at it, I got more beads and made more necklaces. The beads in this necklace are bone and wood.
Posted by Mary Stebbins Taitt at 9/05/2008 11:33:00 AM 6 comments: Links to this post 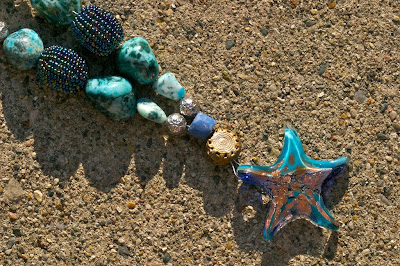 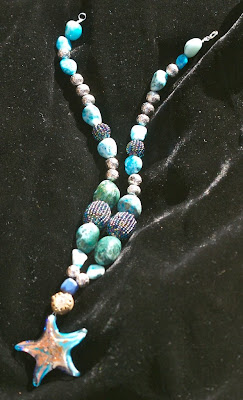 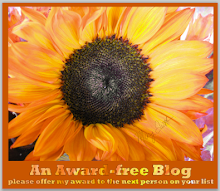 This is an award-free blog. Help yourself to this image for that purpose.

A Selection of my Recent Artwork